Interview with H.E. Babar Hashmi, Ambassador of Pakistan to Bulgaria for The Word Today – December 2017

Bulgaria, being an ancient and mysterious land, has been enticing and enchanting millions for centuries. Personally, it is a privilege and honour for me to serve as the Ambassador of Pakistan to this ancient and beautiful country. A hidden gem in the Balkans, Bulgaria lures and charms. Wonderful warm heartedness and generous friendship, coupled with the Bulgarian ability to outwit harsh challenges, make it an even more interesting and fascinating place.

Now whether one talks about the shyness in the eye, charming smile, alluring beguile, rider on the horse, sacredness of Rila and the Banya Bashi Mosque or the ever-present fragrance of the Bulgarian rose, Bulgaria keeps every one occupied and involved. From its ancient history to the rolling hills of Balkans, from its deep gorges and lush green valleys to the thick forests and the shores of the Black Sea, there is something for everyone to enjoy and relish. Bulgaria simply is “Monogo Monogo Khubova – Monogo Monogo Krassiva”.

Let me first say that it is difficult to generalize. However, probably like writers anywhere in the world, Pakistani writers / poets are sensitive to their immediate surroundings and day to day challenges. Pakistani writers also internalize and assimilate their experiences and then produce creative writings which make the internalized experiences into a universal message. So while some writers delve into realism or pessimism the others may opt for optimism. In Pakistani writings you can find all contemporary trends that are found in the literature of other countries including in Bulgaria.

Pakistan and Bulgaria enjoy long standing friendly relations. More than half a century of bilateral diplomatic relations between Bulgaria and Pakistan are marked by mutual respect, mutual interest, mutual trust and solid friendship. Both countries are custodians of older cultures and ancient civilizations. However, despite half a century of our friendly relations, due to language barrier and some associated factors, writers / poets from both countries have not been able to interact with each other as frequently as they should have been. I believe that writers from both our countries can further deepen the historical, cultural and artistic relations between Pakistan and Bulgaria. My wish is for them to establish and maintain creative literary exchanges. For instance, the writers / poets of both countries through the good offices of the ‘Union of the Bulgarian Writers’ and ‘Pakistan Academy of Letters’ can try to forge a linkage, for example by signing a Memorandum for Cooperation in this regard. They can also translate the creative works from both countries into their local languages i.e. from Bulgarian to Urdu and vice a versa. These writings are also available in English language making the translations into Bulgarian and Urdu even easier. The writers from both countries can also exchange visits and participate in literary conferences and symposia in each country to interact with each other more frequently.

As Pakistan celebrates the 70th year of its independence this year, I would like to take this opportunity to wish success to the readers of The Word Today and to Bulgaria as it assumes the forthcoming Presidency of the European Union in January 2018 and wish for the continued peace and prosperity of the friendly people of Bulgaria.

In Pakistan we consider “Pen is mightier than the sword” and in Urdu we say “Khuda karay zor e Kalama aur zayada” (may the writers have more strength and power in their pens). I wish the Bulgarian readers more courage to find out the truth and wish them success in their endeavours.

The interview was taken by Svetoslav Nahum 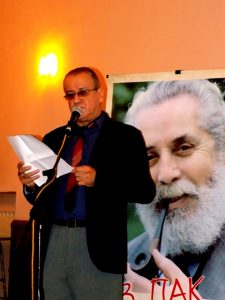 This is a demo store for testing purposes — no orders shall be fulfilled. Отмяна